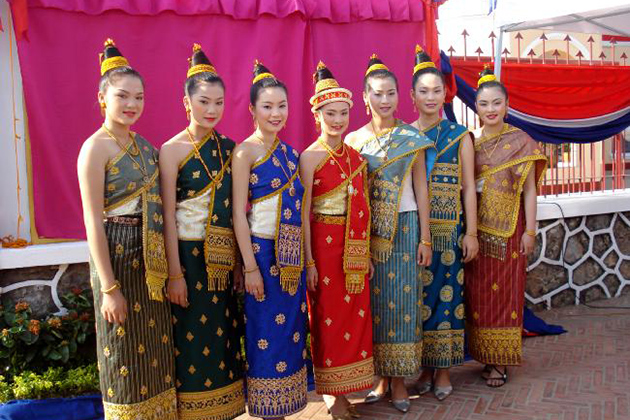 Laos people wear different cloth style depend on the gender and age. In Laos, women are supposed the mothers of the country, so costumes of women are more fussy and beautiful than men’s. They often wear scarves, blouses, silk skirts and then make it a low bun of hair. In Laos language, it’s called a sinh (phaa sin), a suea pat and a pha biang.
Sinh is a wide skirt made of natural silk or cotton. People also decorate it with vivid embroidery featuring the Lao typical culture. Especially, the designs of sinh are very various, specializing for each certain cultural-social occasion. But generally, a standard sinh always has the following three parts:
– Hua sinh, the head of the sinh, is the belt which is usually plaited in and hidden.
– Phuen sinh, the body of the sinh, is the main part of the sinh which often included two colors.
– Tin sinh, the foot of the sinh, is the surround part which is decorated with a lot of details. 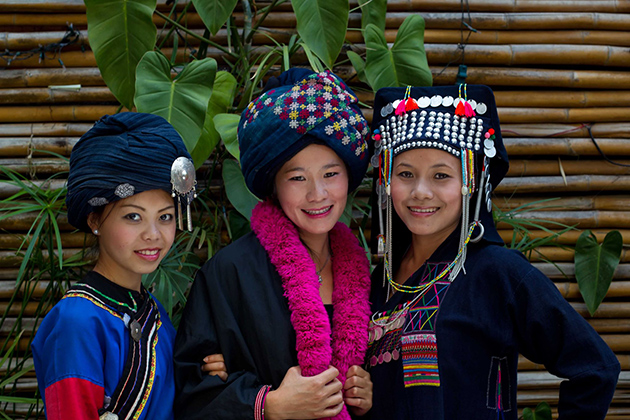 Suea pat is a long-sleeved shirt without buttons. The right way to wear it is wrapping the right side of the front panel over the other side of the front panel and then connecting two panels with strings.
Pha Biang is a long large silk piece wrapped diagonally in front of the breast and squeezed through one shoulder and then ends up behind the back. It is worn by both men and women.
Unlike ladies, Lao gentlemen use salong-big large pants along with a shirt, long-to-knees white socks and a pha biang when embarking important festivals. 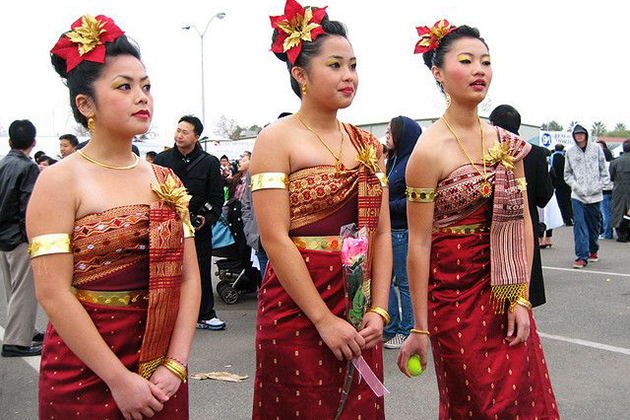 Especially, in Laos, most women have the talent in weaving. The grandmas and mothers always teach their nieces and daughters how to weave since they were very young. Therefore, their traditional costumes are totally hand-made products.
Let’s go through Laos traditional costume in the past. Both Lao women and men used to wear the same model of pants and shirts without any décor. The only difference was that women made a bun of hair and worn earrings.
Besides, similar to many other countries, Laos has a lot of ethnic group, hill tribes living in remote regions. They all have their own traditional styles in clothing, particularly the Hmong group. The Black Hmong’s costume is very beautiful consisting of a jacket with embroidered sleeves, a neck wear, a shawl and leg wraps. Their costume stands out amongst the others with bright colors. They typically wear beaded rings around the shoulders and chest or wear a colorful tartan on the head.